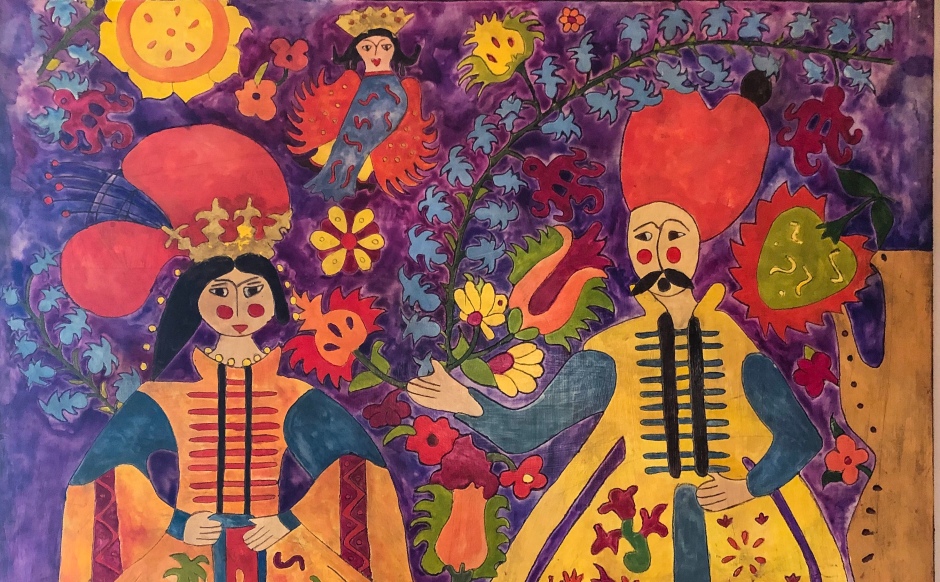 For my next post I had wanted to write about my rug, or rather wall hanging, ‘Agas’ as a follow-on from my previous post. But to properly do so I really need to go back to the beginning when I first began learning pyrography relief artwork.

I was first introduced to nopography & pyrography when attending seasonal art classes at a private art school in Glyfada (a suburb of Athens) in 2007 (if my memory serves me well!). The classes were provided as an extra workshop and I was lucky, and fortuitous enough, to attend as they seem to have stopped teaching it since.

I loved this technique from the get-go -both the process and the resulting effect of relief artwork that simply cannot be achieved by painting the same on canvas. I’ve tried, but not been happy with it so I always go back to pyrography despite the length of time, effort and the resulting weight of the artwork (as I now tend to work on large pieces).

In the workshop we were introduced to a more traditional style of artwork, however, I was keen to use and develop this technique using my own style of illustration and love for bright and bold colour.

The first pieces I created in the workshop were inspired by Greek embroidery and motifs as seen below:

I got pretty adventurous (and ambitious!) and applied the technique to a wooden food tray… 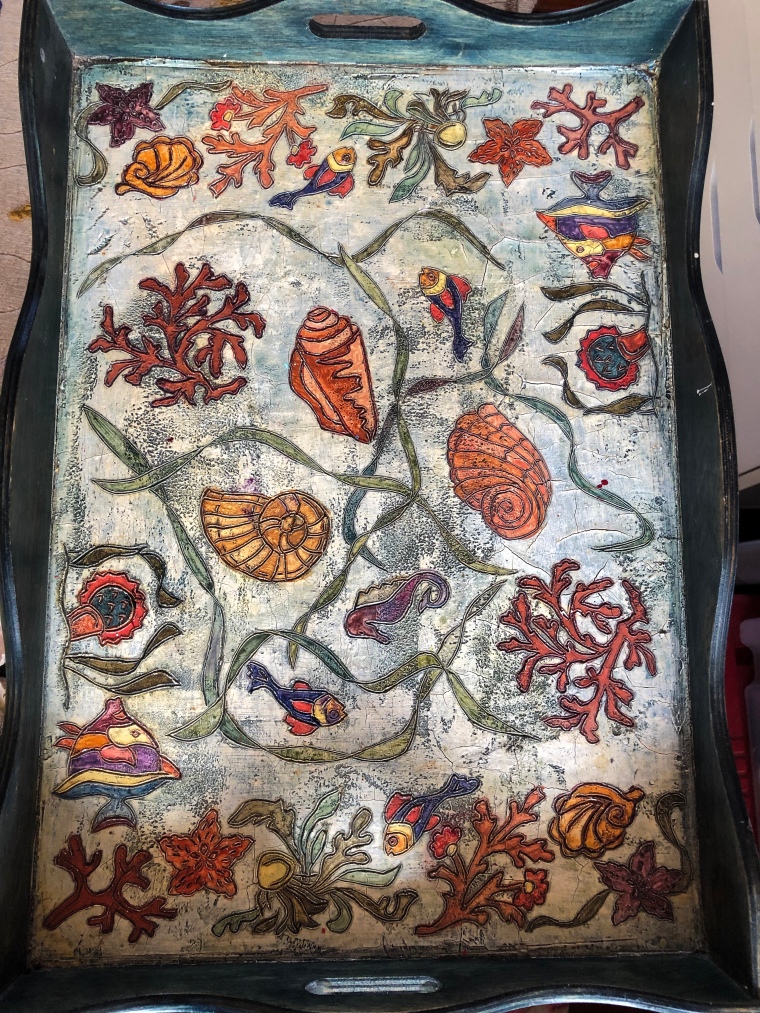 …and even my kitchen and dining tables which was a feat in itself as the surface had to be super smooth! Needless to say, my plastering skills have vastly improved with practice! 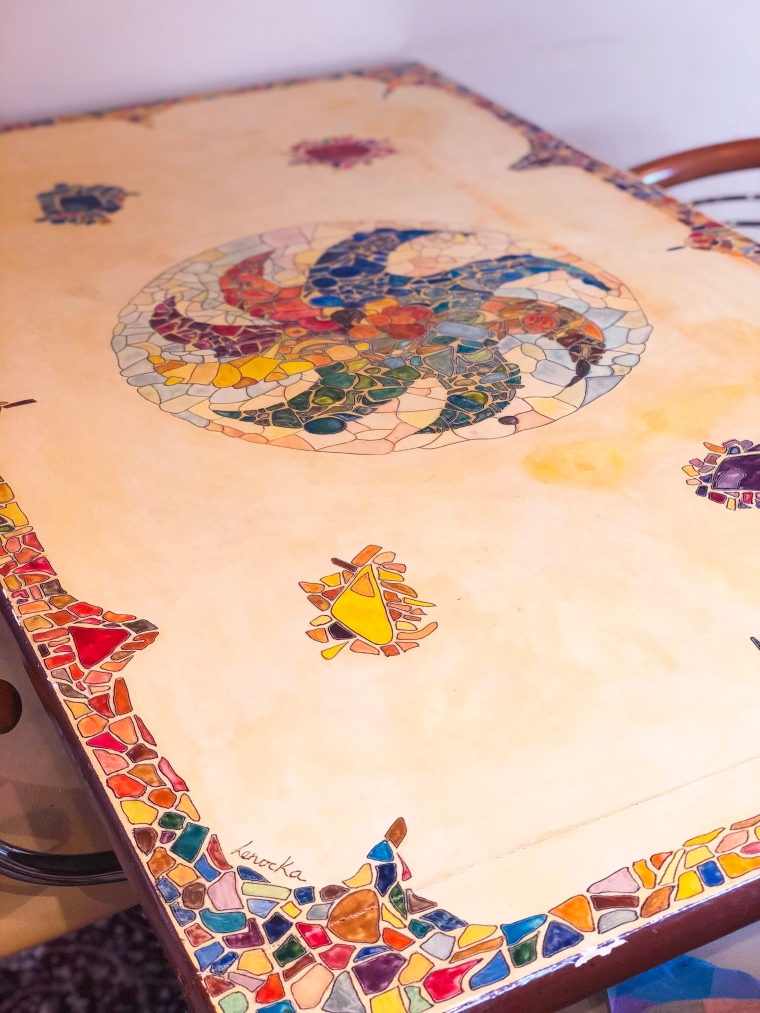 I was then inspired by a Greek children’s book ‘Ta Ellinakia’ (trans: ‘The Greeks’) written and illustrated by Evgenia Fakinou and which was a gift to my daughter from her nursery school teachers. The book is inspired by the figures, boats, flowers and birds of Greek embroidery (in this case in particular of the Ottoman period) used to decorate girls’ dowries and I thought the style would translate beautifully to pyrography relief artwork. 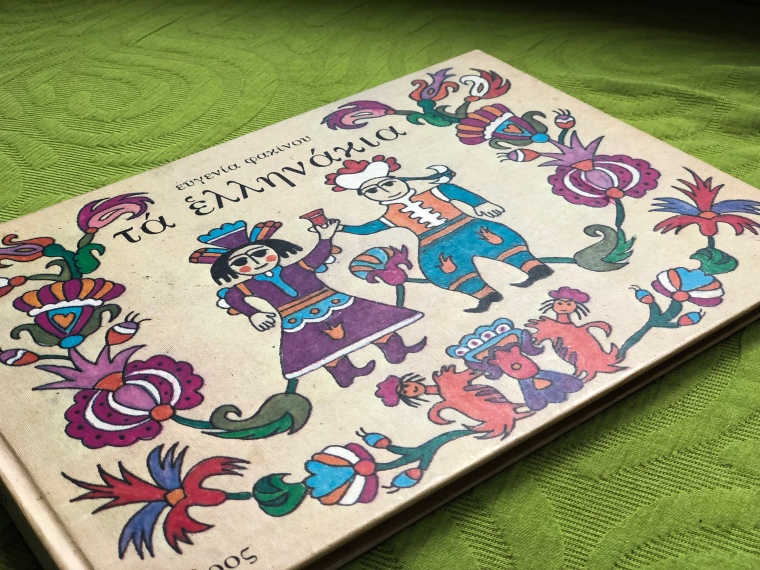 I’ve always loved traditional costume and folkloric design so I explored the subject further and visited the Benaki Museum in Athens which houses a permanent collection of traditional costume and embroideries from the Ottoman period. Whilst there I also splurged on a gorgeous reference book ‘Greek Embroidery 17th-19th Century – Works of Art from the Collections of the Victoria and Albert Museum’ which I could use for reference. 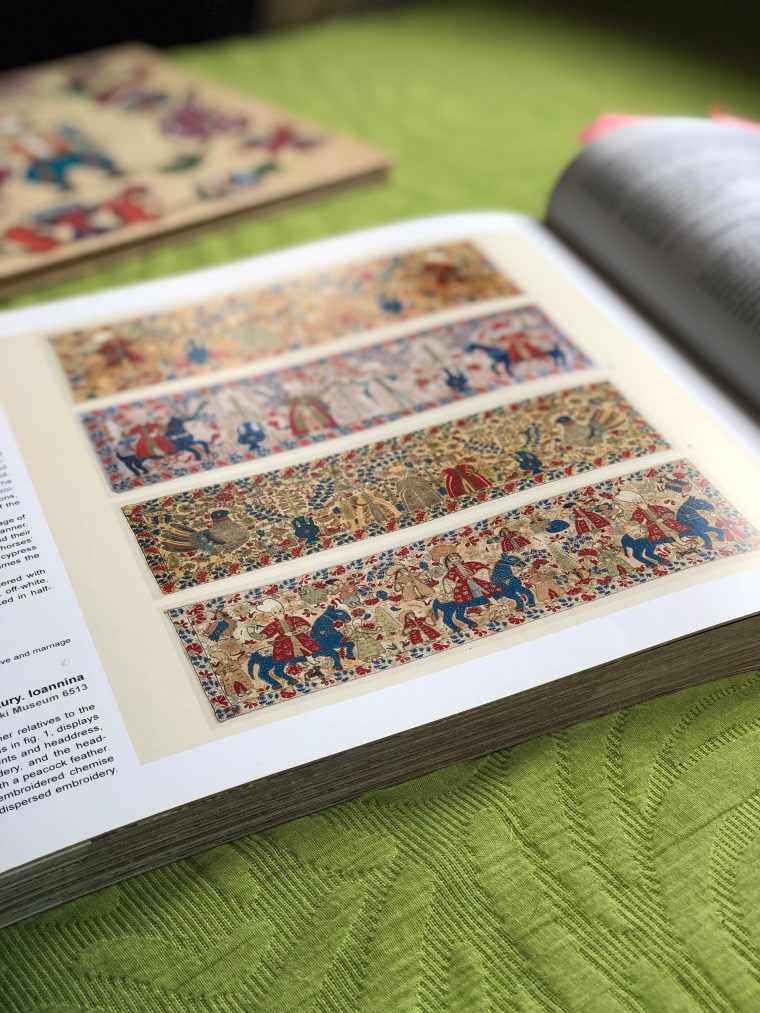 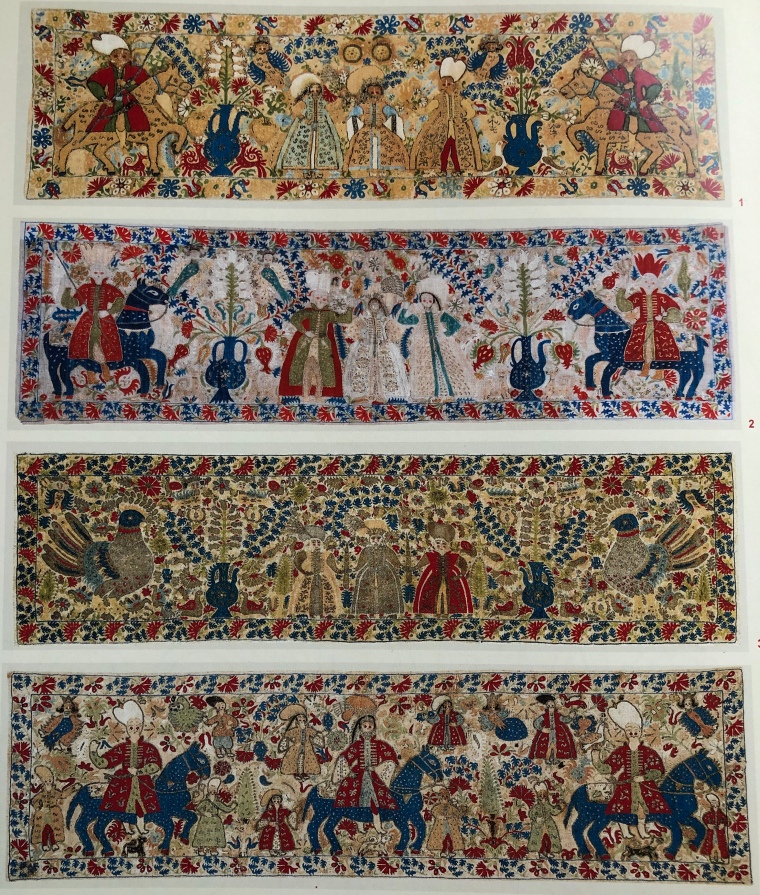 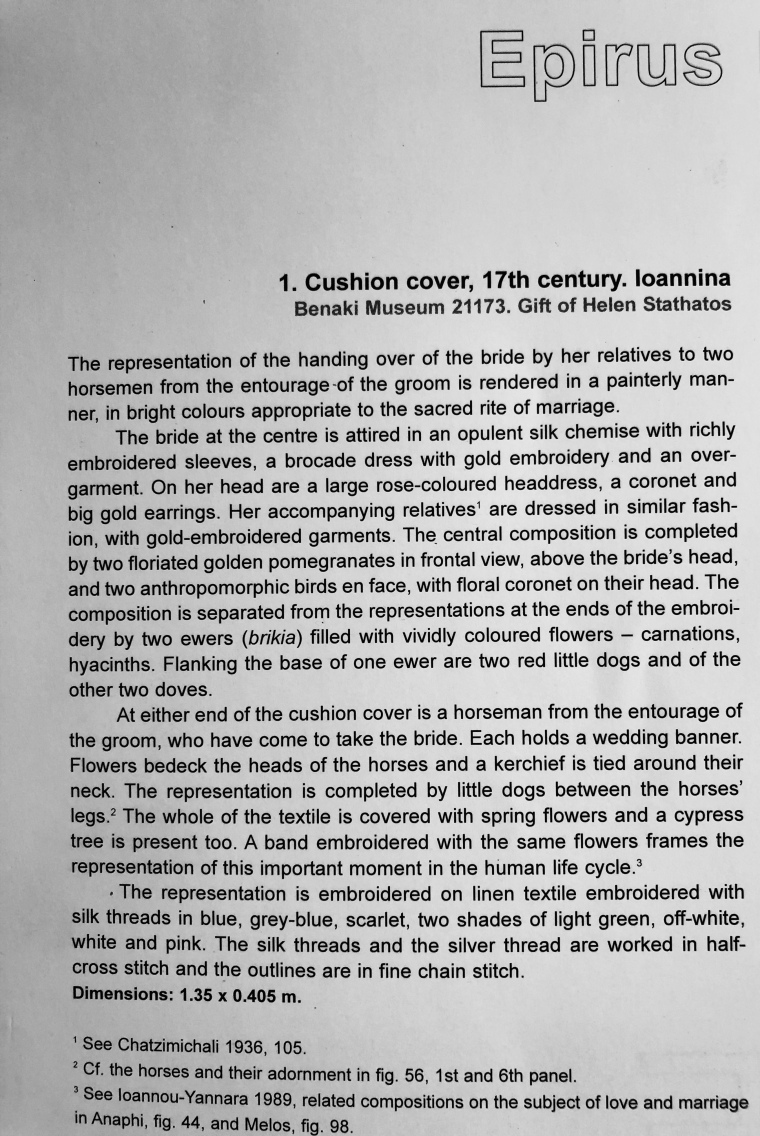 My first pieces following this style were pretty small in size (20 cms width on average) and in my opinion, quite unadventurous, sticking to what was there already. But I was learning the technique and what I could do with it.

Then I started exploring my own drawing style with this technique creating the following artworks: 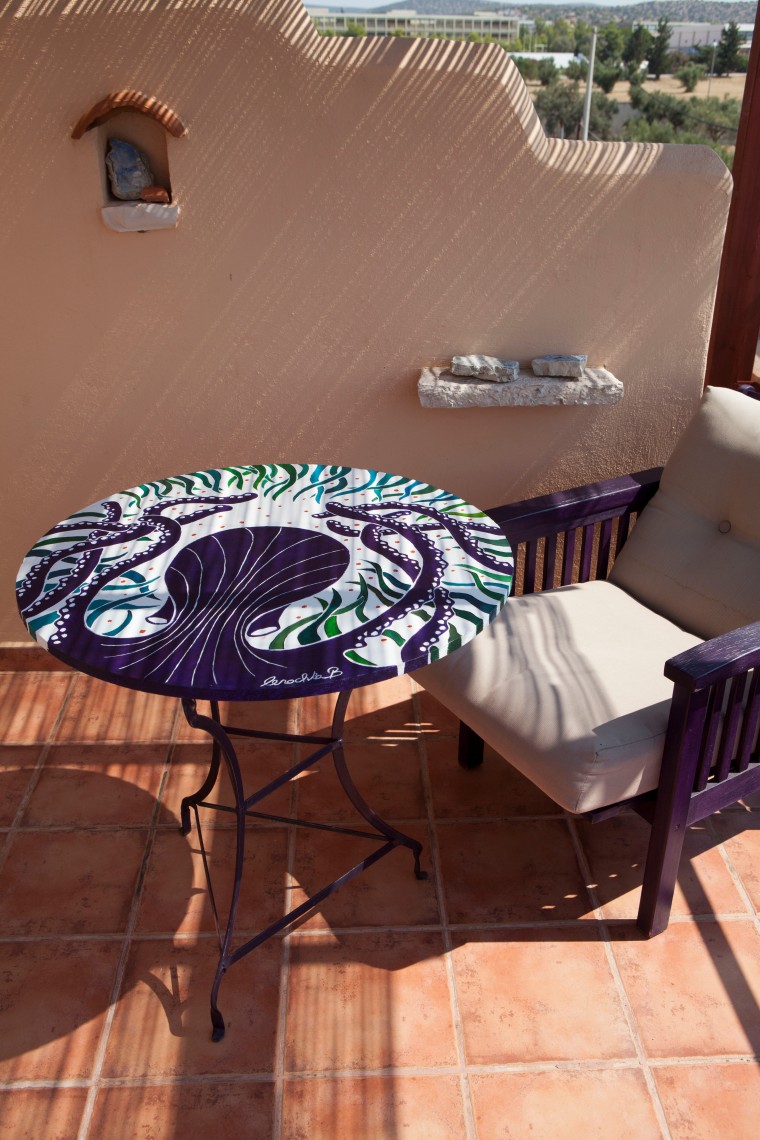 At this time I was still just playing with it. Art was [merely] a pastime, a hobby, and I wasn’t taking it too seriously. But in 2014 I was approached by an acquaintance of mine who had seen my artwork and asked me if I would be interested in participating in a joint exhibition called ‘Art Links’ that she was organizing in Athens.

In preparation for the exhibition I went big and bold creating the following pieces:

and finally, I even made my own table lamp!

Since then I have explored my own style a lot more – see ‘Playing with my Demons’ and ‘The Gift’ as well as my most recent artwork in my portfolio.

I must add, however, that even though I took part in the Art Links exhibition, and a few since then, I have felt quite insecure about my artwork. So much so that I recently thought I wouldn’t even do pyrography anymore and so I returned to working on canvas with acrylics and oils and also watercolour and explored my other love, photography.

But the ‘break’ did me a lot of good. I began to miss working in this medium and missed the end result that I simply could not obtain in any other medium I worked with.

So I have once again returned with renewed energy and enthusiasm and, most importantly, without judgement of myself and artistic skills, but with love for the process and playing with colour and subjects that I love so much.

I hope you enjoyed my post. I tried to keep it as brief and concise as possible to provide some account of the beginnings of my journey into pyrography.

In my next post I will delve into my inspiration for ‘Agas’, my silk wall hanging, which as you can imagine came from my study of Greek embroidery of the Ottoman period.

This site uses Akismet to reduce spam. Learn how your comment data is processed.